The Owyhee River flows through one of the most remote regions in North America. The Canyon-lands of the Owyhee River system is one of the largest unspoiled areas around. The Owyhee River greets one with impressive canyons that rise as much as two-thousand feet above the rivers’ edge. This river has embraced some the most spectacular, rugged and little known country in the states.

The Owyhee River lies in the southeastern corner of Oregon. River Drifters offers three, four, five, seven and ten-day adventures on the Owyhee. On an Owyhee trip one may encounter a band of California bighorn sheep, a dozen kinds of wildflowers, an unexpected waterfall or one of the areas numerous hot springs. One may also see some of the endangered species that reside in this area, like the peregrine falcon. Other wildlife that may be seen are the pronghorn antelope, elk, deer, cougars, sage grouse, eagles and many others.

The Bureau of Land Management in the area describe the Owyhee region as “The most rugged, remote and least known high desert canyon complexes in North America, the Owyhee Canyonlands are also perhaps the most spectacular.”  The Main stem Owyhee was federally designated as Wild and Scenic in 1984 and was additionally listed as an Oregon Scenic Waterway in 1970.  This region is so remote that the entire Owyhee Canyonlands encompass over 5 million acres with just 3 paved roads!

The human history in this area stems back to more than twelve-thousand years ago.  The Owyhee Canyonlands have been a home to Native Americans for thousands of years. Evidence of their existence can be found in the many pictographs, petroglyphs and artifacts that were left behind from them. Since the white man settled this area more than two-hundred years ago, agriculture and grazing had been abundant for many years. Still today, one may spend hours exploring side canyons, old ranchers cabins and of course, rewarding themselves with hot springs soak! The Owyhee River was named by Peter Skene Ogden in 1819 when two of his fellow trappers were killed. The river was named after them and the word ‘Owyhee’ is a 19th century spelling for Hawaii. 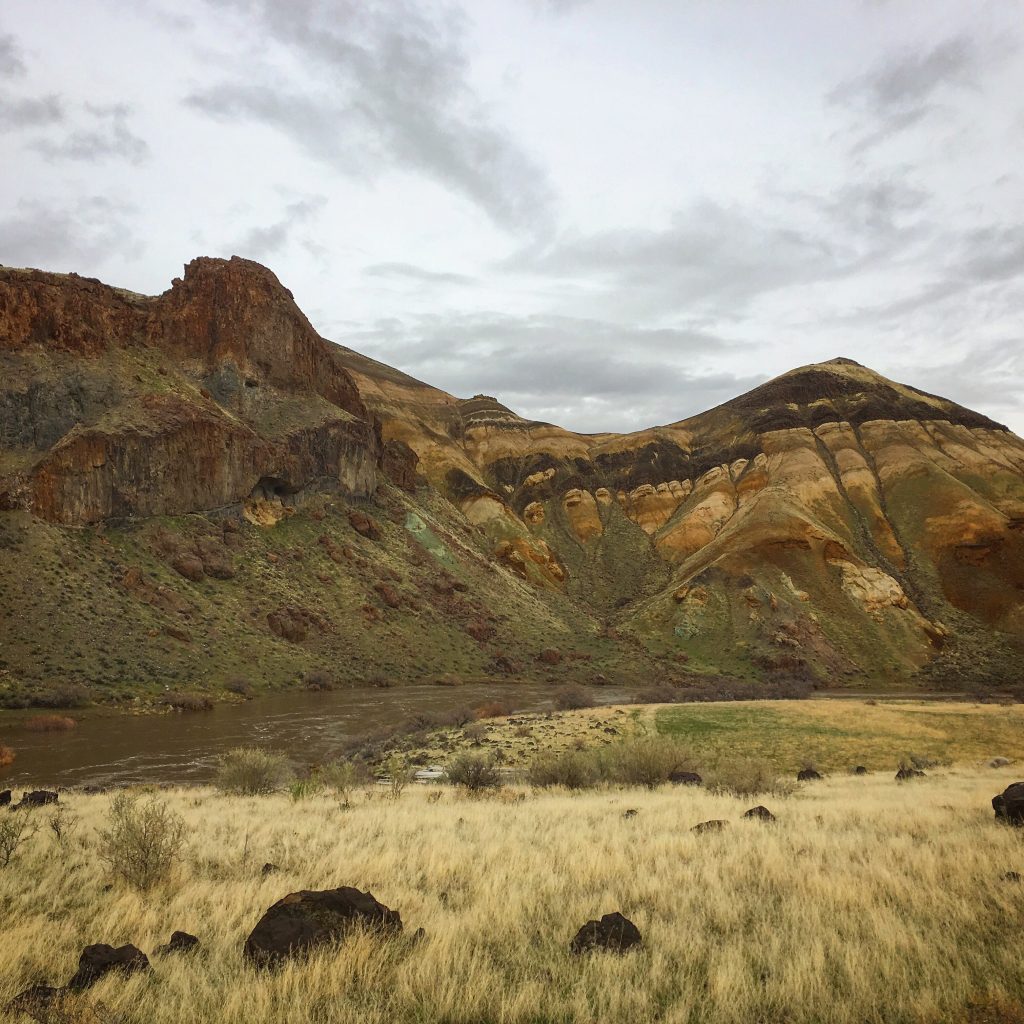 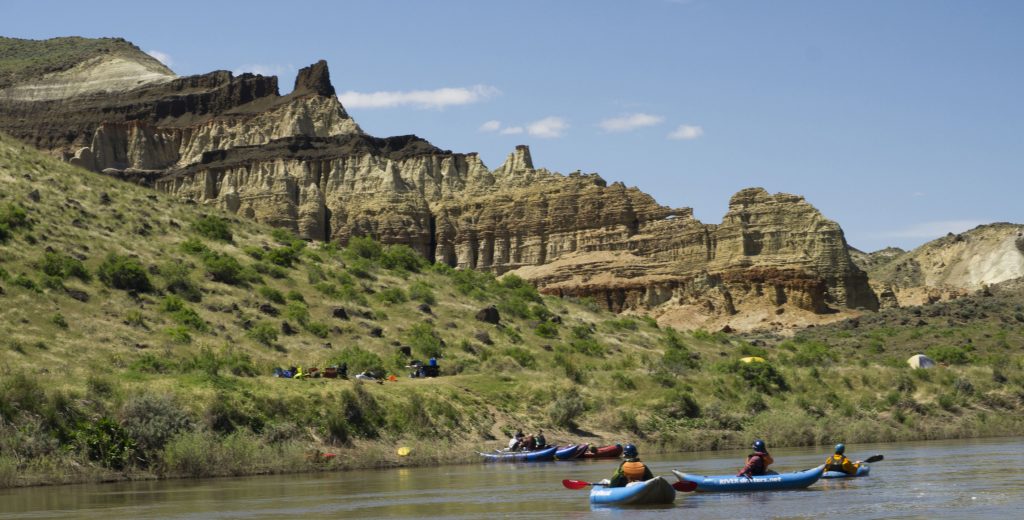 The Lower Owyhee River is likely our absolute favorite river trip that we run.  The scenery is truly mesmerizing and at times hard to believe that this canyon is in Oregon and not the desert Southwest.  Hot Springs, amazing side-hikes, pure tranquility, historical and native American petroglyphs will all welcome the Owyhee River adventurer. This run features some of the most beautiful and amazing landscape of the entire river system. It is said that each mile you travel down this section of the Owyhee you travel back 100,000 years in geological time.

The many canyons of the Owyhee River system are some of the most awe-inspiring & sensational landscapes in Oregon.  The multi-colored cliff walls often rise over a thousand feet from the edge of the river.  The canyon rims are often eroded with many colossal spires, while in other areas the canyon calls reach towards the sky displaying a variety of stunning colors.  There are numerous side canyons that offer a mysterious element of adventure as they twist out of sight.

Some of the most notable landscapes include the Iron Point Gorge, waterwheels, Sentinel Canyon, Montgomery Gorge, Mahogany Mountains, Weeping Wall, Rustler’s Cabin, Bogus Creek Falls, Pruitt’s Castle and the Chalk Basin/Lambert Rocks. The many great scenic aspects of this run are accompanied with petroglyph fields, honeycomb cliffs, fossils, hot springs and scrumptious meals. These alone will help create some of the fondest memories you will ever have. Exciting rapids like Whistling Bird, Montgomery, Artillery, Bull’s Eye, Rock Dam, Rock Trap, Upset and many more will eagerly challenge you!

The Lower Owyhee is only runnable from late March through early June!  This is a very special area of Oregon that is truly like no other.  We highly encourage that you spend a few extra days on either end of your trip to visit some of the areas other gems.  A few of our favorites include: Crane Hot Springs, Jordan Craters, Pillars of Rome, Leslie Gulch, Succor Creek & Silver City. 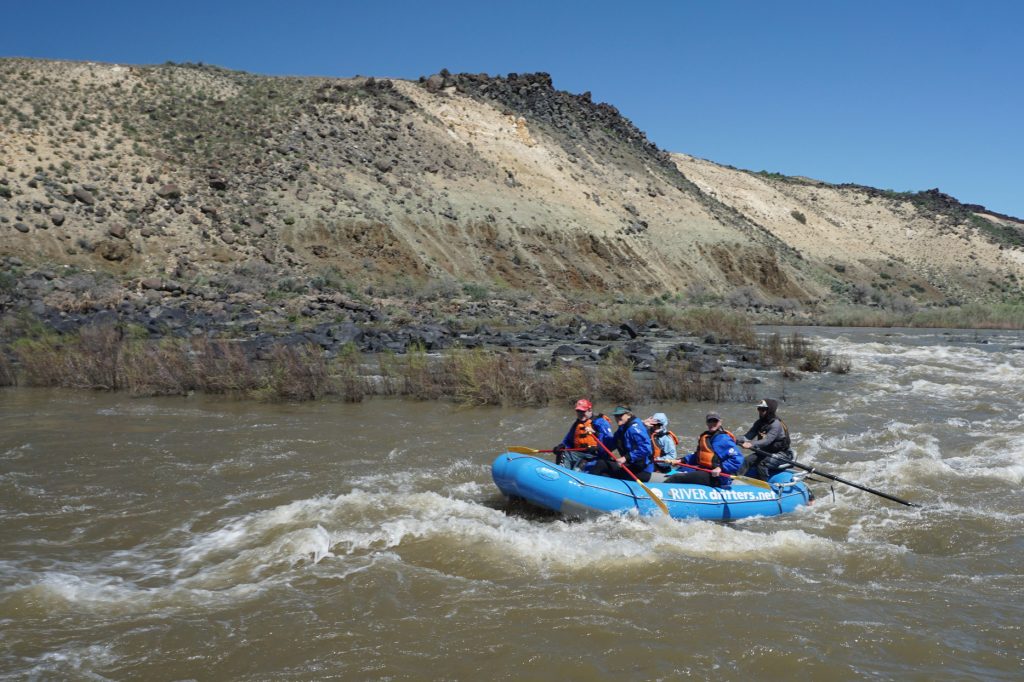 *Other Dates possible based on water levels and number of participants* 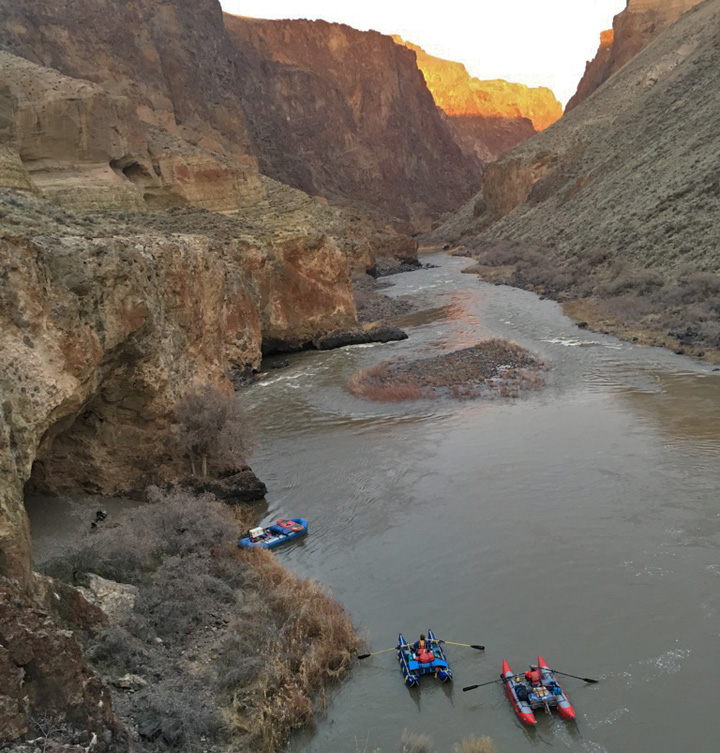 Middle Owyhee RiverThis section of the Owyhee offers hands down, some of the biggest rapids in the Northwest. With famed rapids like Ledge, Subtle Hole, Half-Mile, Raft Flip, Bombshelter Drop, Shark’s Tooth and the mystical Widowmaker, you will be assured of a true adventure!

The spectacular canyonlands are some of the most beautiful around, filled with petroglyphs, massive basalt canyons and a few old abandoned ranches. We explore nature and travel through a timeless journey, stopping at the occasional natural hot springs or hike into one of the many amazing tributary canyons, unique grasslands or an old rustlers’ cabin! Just from the launch site, one can observe the abandoned road intended for the postal service by stage coach. These are just a few of the intriguing attractions that very few people are privileged to see in their lifetime!

The Middle Owyhee is only runnable from late March through late May!

We use cookies to ensure that we give you the best experience on our website. If you continue to use this site we will assume that you are happy with it.Ok