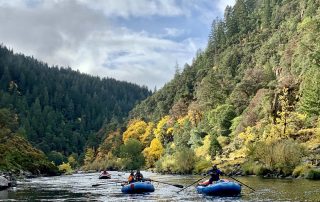 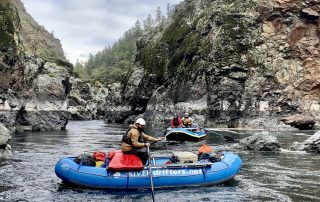 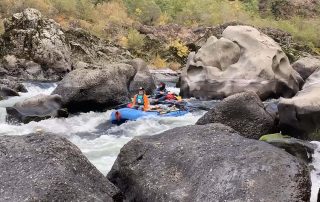 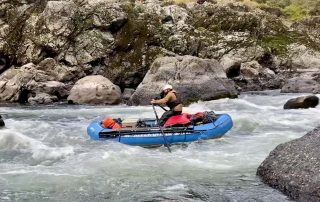 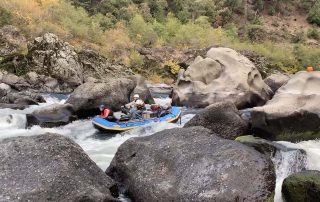 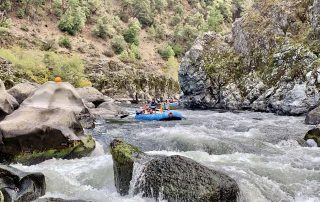 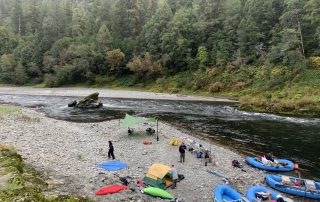 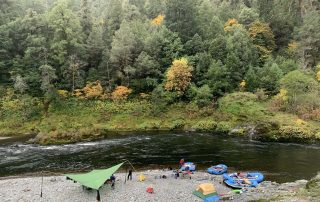 Nestled deep in the coastal Siskiyou Mountains of southwest Oregon, the Rogue River features lush forests, deep green pools, sparkling waterfalls, classic rapids, and a rich past dotted with natives, pioneer families, and early whitewater boaters. In 1968 Congress passed the Wild and Scenic Rivers Act to preserve the nation’s outstanding rivers. The Rogue was one of the eight original rivers protected by this act. Congress validated what an exclusive group of adventurers already knew; that the Rogue River canyon was a rare treasure.  A river rafting trip on the Rogue River is truly one of the best family vacations one can have.

The Rogue River voyages are the oldest and most famous river trips in the Northwest. As early as the 1920’s, Hollywood stars and presidents paid local guides to journey with them through the canyon for fishing, sightseeing, and whitewater thrills. The Rogue quickly developed a legendary reputation as one of the West’s greatest adventures. In this era, Glen Woolridge became one of the original river guides. Much of the river’s illustrious boating history is recounted in his book, A River To Run.

Before the 1900’s, the Rogue was home to the Takelma and Tutuni tribes. These nomadic people moved from the coast to this mountain river to harvest the abundant population of salmon and steelhead. Early exploration by French trappers brought conflict, and the French began calling the tribes “coquins” or rogues. The river became known as “La Riviere aux Coquins” which was later shortened to the Rogue River.

White settlement in the Rogue valley boomed after the discovery of gold in the canyon. The Lower Rogue, where our trip takes place, remained wild and untamed. The lure of precious metal did bring newcomers. Most were hermit miners who worked along the many side creeks. Some were packers or pioneer families who made a living offering services for the miners. The gold rush put pressure on local resources and by the late 1800’s the Takelma and Tutuni were gone.

All along, the Rogue wilderness has been home to a variety of wildlife. Deer, black bear, river otters are often seen on the river banks or swimming in a rapid. The Rogue has been famous for its strong salmon runs and an observer can still spot salmon leaping the main drop at Rainie Falls or cooling off at the mouth of a side creek.

Osprey and bald eagles have firmly reestablished permanent homes in the canyon; each with different fishing techniques. The osprey dive head first into the river and submerge much of their body before flying away with a fish in their beaks or claws, while eagles fly inches above the water and use their talons as sharp hooks to scoop and snare the fish that swim just below the surface.

Much of the Rogue’s mysterious charm resides in its lush verdant surroundings. The dense forest is one of the oldest and most diverse in the country. The canyon is essentially blanketed in green. Huge pine and fir trees mix with dramatic madrones, maple, mock orange and myriad wildflowers. The lower canyon has dozens of side creeks with fern-lined grottos and some of the most spectacular swimming holes anywhere. Side canyon streams provide stellar hikes and habitats such as Tate Creek and Floral Dell featuring breathtaking waterfalls that cascade down verdant mini-canyons.

The narrow confines of the lower Rogue canyons create some of the best whitewater in the West! Fun friendly rapids are interspersed with large calm pools through a maze of river boulders. Some rapids are consecutive like Tyee, Wildcat, and Slim Pickins rapids that lead to Black Bar Falls. The adrenaline mile before Mule Creek Canyon leads to the infamous Blossom Bar. The river is a camp rafting paradise and a great introduction to the outdoors for all skills levels.

HOW LONG ARE THE DAY TRIPS & WHAT TIME DO TRIPS START AND END?

Multi-day trips are 3 or 4 days in length with 2021 launch dates set for Wednesday. You will arrive at The Galice Resort, Galice, Oregon by 9am, Pacific Time, on launch day. You’ll reach the take-out by early afternoon on day 3 or 4 of your trip respectively, where a shuttle will be waiting for you to return you back to your car at The Galice Resort.

The age minimum for this trip is 8 years old. The physical and mental criteria for eligibility to participate on any River Drifters river trip can be found on our Eligibility Criteria page.

DAY 1: Arrive at The Galice Resort, Galice, Oregon by 9am, Pacific Time. Please eat breakfast before arriving. You’ll get outfitted with a wet suit, PFD, splash jacket and waterproof dry bag (provided by River Drifters), and use the restroom, etc. Our guides will give a safety talk and provide instructions for the basic paddle strokes you will need for your trip. We’ll have rafts as well as inflatable kayaks. After the safety talk, we’ll launch onto the river! After a couple of hours on the river, the group will stop for a lunch of sandwiches, fresh fruits and veggies, cookies and lemonade. Then it’s back on the water until we reach camp around 4:30pm – 5pm. Hors d’oeuvres and beverages will be provided shortly after arrival to camp. You’ll set up your tent, go for a hike or relax by the river until dinner is served about 7pm.

Note: you are responsible for arriving at The Galice Resort by 9am on the day your trip begins.

DAYS 2-3: You’ll wake up to coffee brewing by 8am while your guides are busy making a healthy and hearty breakfast. After breakfast, the group will break down camp and hit the water by about 10am. The group will stop around 1pm for lunch, and possibly take a hike or explore waterfalls. Camp and dinner routine is the same as Day 1.

DAY 4: Breakfast is served about 8am. The group will break down camp and hit the water by about 10am. You’ll reach the take-out by early afternoon, where a shuttle back to your car will be waiting for you. You’ll return your wetsuit, PFD, dry bag and any other River Drifters gear before changing and heading home.

Our guides are accomplished in outdoor skills, trained in first aid, CPR and river rescue, and knowledgeable about the natural and cultural history of the area. They are fun, interesting folks who have a passion for rivers and people. If you have questions about rafting, camping, cooking in the outdoors or anything else, ask and they will likely be happy to help.

The weather in southwestern Oregon in the spring can be extreme and change quickly. With elevations ranging from sea level to 3,540 feet, temperature swings can vary as much as 40 degrees or more during the day. Be prepared for sun, rain, and wind.

Your safety and comfort is our top priority. River Drifters provides all necessary rafting and safety gear, and makes sure that you have professional, experienced and well-trained guides.

CLOTHING • One pair of quick-drying shorts and two t-shirts (wool or synthetic are best, but cotton is OK for camp). • Long-sleeve synthetic shirt and hat for sun protection. • Swimsuit. • Old pair of tennis shoes, neoprene booties with soles or sandals (closed-toed, such as Keen, are recommended). • Camp shoes – lightweight tennis shoes, Crocs, sandals, etc. • Long pants, either nylon or fleece depending on preference. • A fleece or down vest, sweater or jacket. • Wool or synthetic long underwear top and bottom. • Raincoat and pants. • Two pairs of underwear. • Two pairs of wool or synthetic socks. • Beanie and lightweight gloves (in spring and fall). • Change of clothes for drive home.

GEAR • Sleeping bag (with waterproof stuff sack) and sleeping pad. • Tent. • Sunglasses and/or prescription eyeglasses or contacts (plus spare sets). • Sunglass strap for both sunglasses and prescription eyeglasses (we sell these in our shop). • Flashlight, spare bulb and spare batteries. • Personal water bottle with strap or carabineer for attaching to boat. Note, a rental sleeping package is available from our office. This package includes a tent, sleeping pad and sleeping bag.

Our guides work very hard throughout the season to ensure that guests have an enjoyable trip. As such, tips are very much appreciated by our guides. Tips normally range from 10% of the trip cost. How much you tip should depend on your satisfaction with your trip and your financial means. Most people tip the lead guide, who will split the money equally among the crew.

Is this trip appropriate for kids?

Usually, the Rogue River is perfect for the whole family. Kids age 8 and older are allowed to join  multi-day trips. A child’s maturity level would be a greater factor than his or her age. Please call us to discuss your situation.

Can I bring alcohol?

River Drifters does not furnish, sell or give away alcohol of any kind during our trips. If desired, you may bring your own alcohol in non-glass containers and we will transport it to camp for you. Please drink in moderation. Note, we do not allow alcohol on any youth trips.

Do you have lodging recommendations?

We recommend the following lodging:

Do you have dining recommendations?

Do I need to be worried about other hazards?

Do you suggest any books about the Rogue River?

The current river flow of the Rogue River at Agness

The current river flow of the Rogue River at Grants Pass

Please feel free to contact our office at 1-800-972-0430. Once on the river, our experienced and knowledgeable guides will be happy to answer any questions you have. We welcome suggestions about how we can make your next experience on the river an even better one!

Wild and Scenic canyon featuring one of the oldest and most diverse forests in the country with thrilling whitewater, quiet seclusion, abundant wildlife, and rich history.

Fun for first-time river rafting enthusiasts, families, and experienced rafters alike who are looking for some of the best whitewater in the west!

Journey back in time by raft to see why Hollywood stars and presidents paid guides for fishing, sight-seeing, and whitewater thrills.

Are you ready for your rafting adventure on the Rogue River?